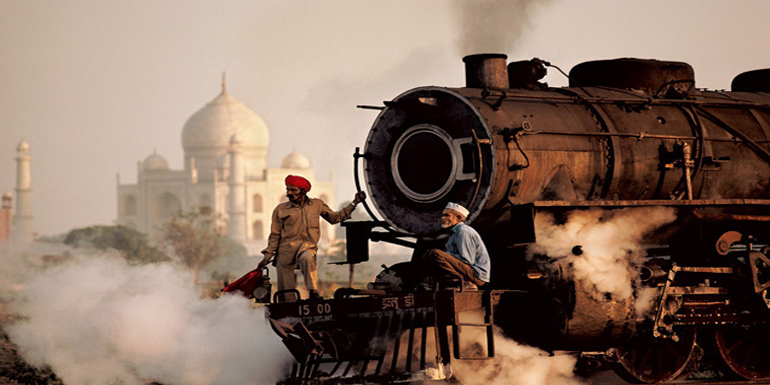 One Day – Every day, except Friday

Being the importance cities of India, Delhi and Agra have excellent transportation service between them. Flights, buses and trains, all are available between these two cities, out of which trains are the most comfortable medium of travelling.

Our same day Agra tour by train is the best choice for those who want to experience the mesmerizing glory of Agra without spending much time. Starting from Delhi, you travel in Shatabdi Express to reach Agra, enjoying the natural ambience enroute. While travelling in a car or bus, it takes around four hours between Delhi and Agra which may spoil your day's plan. Shatabdi takes less than two hours and thus allows you to enjoy your trip without feeling shortage of time.

We will receive you from hotel or airport and will take you to the New Delhi railway station where you will catch the train for Agra. Breakfast will be served in the train. Enjoy the 2 hours journey with delicious breakfast and outer sightseeing. Reach Agra by 7:15 and start your trip from the Taj Mahal.

The trip starts from the Taj Mahal, for which you particularly visited this city. Counted amongst the Seven Wonders of the World, Taj Mahal is also known as Symbol of Love. The beautiful monument is located on the banks of River Yamuna and gives an awesome view in early mornings.

Second milestone in your journey is the Agra Fort, which is a massive fort constructed by Emperor Akbar. The fort is located in the North-West of Taj Mahal.

After visiting Agra Fort, drop into a restaurant and enjoy a delicious buffet lunch, and get yourself refreshed for the next attractions.

Located at a distance of Agra is Fatehpur Sikri, a town included in World Heritage Sites by UNESCO. The city was developed by Mughal Emperor Akbar and served as a capital of the Mughal Empire for several years. It is said that the city was very prosperous at the time of its development, and thus Akbar decided to use it as the capital. Later, some mysteries started happening there and the capital was shifted to Lahore. The city is also known as Ghost Town. Today, the ruins of splendid buildings constructed by Mughals can be seen here.

Return to Agra and wander in the streets of the city. Agra is very popular for its handicrafts, marble statues, replicas of Taj Mahal and other souvenirs. Do some shopping and collect the memories.

Enjoy the epic love story of Shah Jahan and MumtajMahal in Kalakriti Show. The light & Music show will surely capture your attention.

You will be taken to the railway station to catch Shatabdi for your way back to Delhi. You will be served your dinner in the train.

we will drop you to your hotel or airport for the end of the pleasant Same Day Agra Tour by Train.