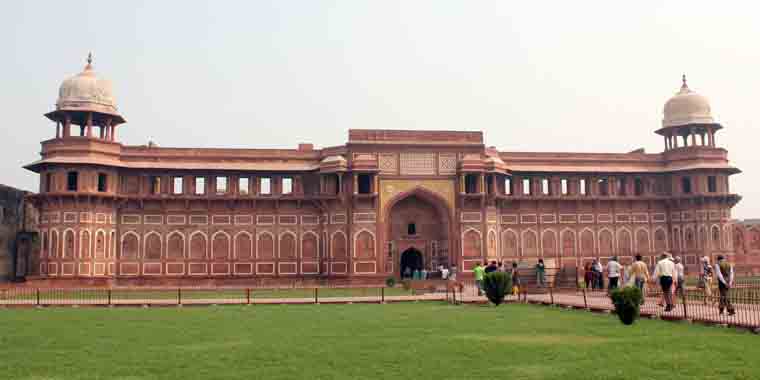 Days of Run : Every day except Friday

If you are short of time and still want to enjoy the best of Indian heritage, same day Agra tour by car is the perfect journey for you. Compressed in a single day without leaving anything worth watching, this trip takes no more than one day.

The journey starts from Delhi where we will welcome you at hotel and will take you towards Agra in a car. Stop midway for a delicious breakfast, and enjoy the scenic beauty enroute. Reach Agra by 10:45, and go straight to Taj Mahal, one of the seven wonders of the modern world.

The most exciting part of the journey lays here, in to the Taj Mahal. Taj Mahal is indeed a viewer's delight. Build by Emperor Shah Jahan in fond memory of her wife MumtajMahal, the building is created in pure marble. Taj is located on the banks of River Yamuna covering a ground of 42 acres. Due to its supreme architecture and beauty, the monument is considered a must during the visit to India.

Looking from a distance, this monument is no different from other historical monuments located in India. It's a square building which looks similar from each side. There are four high minarets on the each corner, and a huge tomb at the top of the monument. The entire building is carved with excellent carvings. One thing which makes is different from other similar monuments is its gigantic size. It's virtually impossible to create such a huge construction with such beautiful designs and patterns.

The actual beauty lies inside the tomb, where you will find the graves of Emperor Shah Jahan and his wife MumtajMahal, lying by each other. There are many rooms inside the tomb which too are carved with excellent patterns.

Pop in to a hotel and enjoy a delicious lunch while discussing the beauty of Taj Mahal.

Next destination in the trip is Agra Fort, which is also a supreme example of fine construction. The fort has served as the capital of Mughal Empire and thus holds the glory and memories of the dynasty. It was constructed by Mughal Emperor Akbar in 1565 AD, and contains many other buildings like the Moti Masjid and Musanman Burj. Musanman Burj is believed to be the place where Emperor Aurangzeb imprisoned his father Shah Jahan.

Located at a distance of 10kms from Agra, Sikandara is the mausoleum of Emperor Akbar. The tomb is popular because of the combination of Hindu, Christian, Islamic, Buddhist and Jain architectural styles used in its construction.

After completing a lavish trip to Agra, proceed back to Delhi in a car. Enroute take a refreshment and reach Delhi for your flight for next destination.