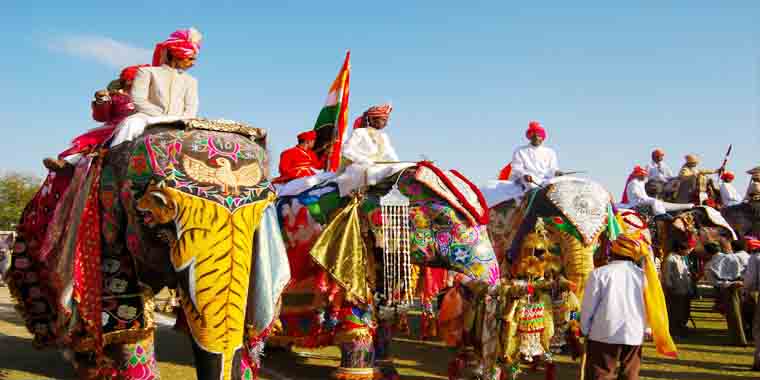 The journey starts from national capital of Delhi where our representative will welcome you at the airport or railway station. From here, you will be taken to your hotel for a night stay.

Have your breakfast in hotel and start exploring the culture of Delhi. As it’s a culture tour, we will take you to the heritage beauties of the city including the Laxmi Narayan Temple, India Gate, Rashtrapati Bhavan (President’s House), Raj Ghat (Mahatma Gandhi Memorial), Humayun’s Tomb, Qutab Minar and Lotus Temple. Return to your hotel in evening and rest for a night.

After having your breakfast, drive towards Amber Fort which is located 11km from Jaipur. Amber is a small town which has served as the capital of Jaipur state. You may also enjoy elephant ride here. Next destination is Jaigarh Fort which is also a massive fort located atop a hill. The fort houses Jaivan Top, world’s largest cannon on wheel. In afternoon, visit Handloom Market and do some shopping. Return your hotel in evening for rest in the night.

Next morning, proceed towards Agra, the city of Taj Mahal. Enroute visit Fatehpur Sikri, a historical city which houses many forts and palaces built by Mughal Emperors. Continue driving towards Agra and check into your hotel. After having some rest, visit Taj Mahal, the Symbol of Love. The beautiful building was constructed by Mughal Emperor Shah Jahan. Later visit Agra Fort which is also a piece of architectural masterpiece. Return your hotel in evening and spend your night.

Day 6 – Agra to Orchha via Jhansi:

Early morning, ride into your car and drive towards Orchha, a city mainly important for its beautiful forts and temples. Check out the beauty of Orchha Fort, Ramji Mandir, Raj Mandir, Jahangir Mahal etc. Return to your hotel in Orchha for night stay.

Day 8 – Khajuraho to Varanasi (by flight):

After architectural masterpiece, next destination is pilgrimage masterpiece. Catch your flight for Varanasi and explore the banks of holy River Ganga. The city is mainly popular for its holy shrines and temples. Together with being spiritually popular, these shrines and temples are also popular for their supreme architecture. Check into your hotel in evening and spend your night.

Early morning, go out and enjoy a boat ride on River Ganga. The early morning atmosphere of prayers and offerings is a must visit sight. After that, return your hotel and have your breakfast. Then proceed to attain the enlightenment, and visit the temples of Varanasi including the Golden Temple dedicated to Lord Shiva, Durga Temple etc. In evening, be at the banks of Holy River Ganga to attend Ganga Aarti, which takes place at the Dasaswamedh Ghat near the Kashi Vishwanath Temple. The best way to watch this aarti is riding on a boat and reaching close to the banks. Dozens of Pandits wearing saffron and having incense sticks and large flaming lamps perform the worship. Thousands of people attend this early morning worship. Overnight stay in your hotel.

Day 10 – Varanasi to Delhi by Flight/Train:

On the last day of the culture tour, catch a flight/train for Delhi. Our representative will drop you on airport or railway station for your journey ahead.